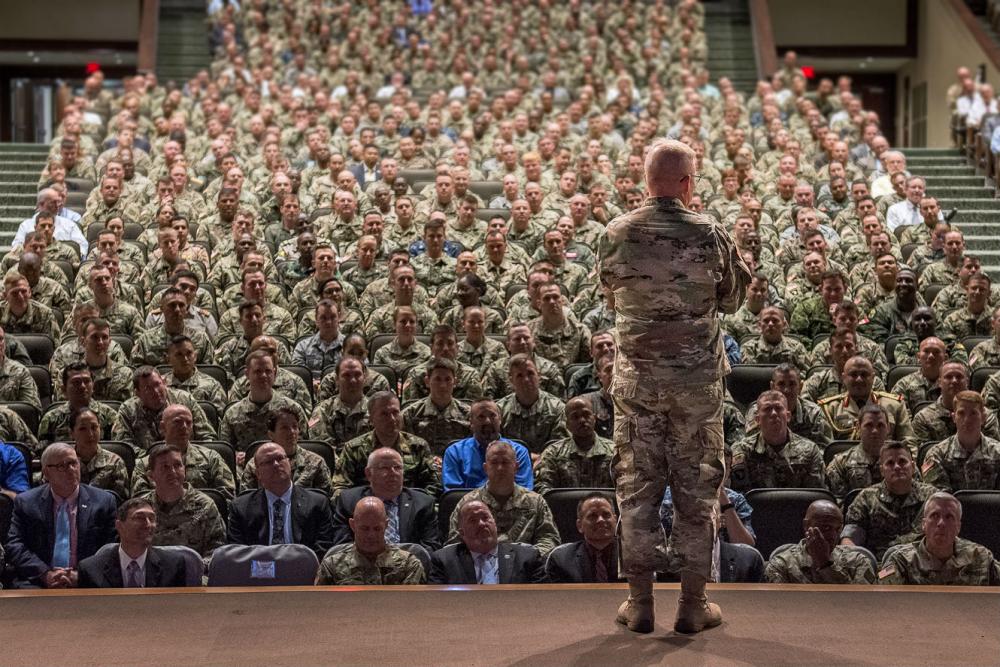 The US Military is a corporate constitution of five service organizations: The Air Force, Army, Coast Guard, Marine Corps, and Navy. It is not just an embodiment of power, resources and authority but above all it is a family of men and women who are always fastened with readiness to initiate peace and security. It holds the largest number of personnel who are mainly paid volunteers. The military is documented to be made up of about 1.4 million people on active duty and approximately 850,000 in the reserves. It is admired more than any other institution because of its heroic nature and especially because of the legendary heroes.

The army previously has been faced with the challenge of education and the preparation of their future strategic leaders in attaining their mission and vision. Strategies were revised based on the need. For instance, the military alliance between the US and the West Europe that bore The North Atlantic Treaty Organization (NATO) for the purpose of providing military strength as an assurance to them that their security would not be threatened by the Soviet Union any more (Untied States Army, 2013). Military soldiers and leaders used mastery skills to survive in the battlefield.

The battlefield is an extremely hostile environment for all individuals. Its complexity has increased with the recent technological developments worldwide. Today, previous strategies are no longer effective due to loss of relevance. National interests, values, policies, strategic disciplines, and appraisals are more advanced. The current strategy is focused on regionally aligned and mission tailored task forces which are operated by empowered leaders and soldiers. The current strategy is a Skill Based Training Program meant to promote lifelong learning of personnel in the army.

The brand mission of this strategy is aligned to the aim of the state of the provision of peace and security. The vision is stated as “The Army is globally responsive and regionally engaged… As part of the Joint Force and as America’s Army, in all that we offer, we guarantee the agility, versatility and depth to prevent, shape and win” (Untied States Army, 2013). Essentially, their vision is focused on preventing conflict and destabilizing activities, shaping securities in complex conditions and winning the battles and wars through prompt and sustained combat.

The military has purposed to train members of the force to be more diverse, adaptive and to develop fast response and attack modes within combatants. This strategy will involve exhaustive training, group organization and the equipment of task force units. The forces have been divided into three categories: The Current Workforce which is optimized for Iraq and Afghanistan, Regionally Aligned Forces which focus on improving ability to respond to contingencies and Mission Tailored Forces which are optimized to tackle border range contingencies.

The Skill Based Training (SBT) strategy is packaged with components of leadership, organization, personnel training, doctrines and facilities (Wyche, 2015). The training has been structured in every complexity of the battlefield framework whereby the soldier is trained to quickly spot a threat, decipher the course of action immediately act on it to defeat the existing enemy. The soldiers will further be trained on adaptability, initiative, teamwork, collaboration, critical thinking and problem solving and how to apply knowledge and skills in operational situations. The soldiers will be given more practical training and less theoretical learning in order to support hands-on experience and boost their confidence in handling combat tools and equipment.

The major asset for the military is human resource: physical, mental and spiritual. The human asset is key to gaining competitive advantage through higher education and professional training. In addition, the social perspective of human beings (leaders and soldiers) makes them more important than any other resource. According to Resource Based Theory, a firm’s level of competitiveness is influenced by the combination of its resources and capabilities. Every institution should aim at attaining an optimal combination through a value chain process that puts human resource at the top of the pyramid. This is because human resource is the only thinking resource characterized by knowledge, experience and skills. Therefore, the success of SBT relies on its ability to influence soldier and leader development.

In addition to human resource the army requires a stable network whose operations are well informed by cyberspace forces and maintained defensively. The structure of this network consists of a single secure standard-based communication network. The internal components will be aligned end-to-end/ back-to-back to ensure that the soldiers are interconnected to each other, to all their equipment and to important information. Instructors are expected to use technological devices such as mobile phone applications, project simulations and videos as teaching aids. All combat training tools will also be used to train the soldiers.

The first step to implementation is to receive appropriate authorization. The strategy is consistent with all applicable statutes and National Command Authority Directives. The military’s systems and procedures fully support the utilization of this strategy. The supporting partners include agencies, all government departments in all states, multinational partners and technology developers. All these units provide governance resources of development of architecture and access to Information Technology. These units are expected to support the implementation of the strategy through the adoption of the best system of selection, the best training program, the best reward system, cooperation and commitment between personnel at all hierarchical levels. The entire military force will be involved in the planning and implementation of the strategy.

Barney and Hesterly’s VRIO model has been appropriately implemented in the strategy. Value as represented in the current structure, corresponds to the ability of soldiers to carry out tasks as they should be performed. The proposed strategy will increase value by ensuring they have the knowledge and ability to follow all training protocols. The strategy is very comprehensive in a way that will empower soldiers and improve their mobility, lethality, structural analysis, and protection.

The gist or Rarity is to develop tactics that the enemy does not have. For a resource to ensure the achievement of above average results, it must be rare. In this strategy, rarity is that of the knowledge and abilities imparted throughout the process. These abilities are considered during recruitment as well as knowledge imparted. Personnel creativity and innovation as well as investment in development of rare talent, knowledge and capabilities will boost the competitiveness of the military. The recruitment process will match the levels of knowledge and skills of the soldiers at the entrance level and their capability to generate 100% turnover in the military. Soldiers will be recruited to meet 21st century challenges.

Inimitability is a framework that can be analyzed by reviewing the length of time/ period it will take the enemy and other military organizations to copy and implement this strategy, which involves comprehensive human development management. Knowledge and abilities can hardly be imitated because the information used to train the soldiers and leaders will be difficult to obtain considering the fact that only a small proportion of the Department of Defense possesses it. This knowledge and training is not transferable to any other government unit. Organizational support is a function of all the leaders ranging from team captains to the commander in chief who is the President. SBT will be administered through the Ordnance School which supports opportunities for nine military occupational specialists. The programs also need to be licensed and to receive credentials from other trainers and training schools as well as the relevant military training base. All these four components are insufficient if they are implemented separately. For a successful implementation, they must work in synergy to give a sustainable outcome.

The strategy’s level of strategic thinking is moderate. Leader-operational thinking should be guided strategically, operationally and tactically (Cone and Creed, 2014). All teams must be well grounded and comfortable in their operational approaches. Although the plan is set to develop leaders and soldiers who can be accepted in other organizations outside the military (military to civilians), people in disparate organizations might be reluctant to capitalizing on military expertise. Consensus-building must be incorporated such that civilian organizations and external environment components are persuaded to work and compete with army professionals (Cone and Creed, 2014). For example, introduce a relationship between senior military officials and civilian leaders.

There is a need to exert enthusiasm and innovative excitement among army soldiers and young leaders. This requires the use of intellectual energy that will elevate individuals who have been considered unsuitable physically to join the army but have excellent talent and skills. A talent management program should also be included so that combatants are not just smart people but tactical through innovative approaches in handling difficult operations.